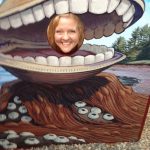 The women in my family have a tendency to shop to earn their keep. I mean the feeling is that if I buy stuff on sale, I’ve almost made money, which would be true if it was actually stuff we would have needed to buy anyway, but … you know what I’m getting at.

Well, the grocery store up the street was going out of business, and everything was half price. It was day four of the sale, so things were pretty picked over. I did find a few things I would have bought anyway down the first three aisles I perused, but I was being careful not to get too much – even at half price.

I heard some chatter in the next aisle, and the manager came by me and said, “Did you hear? You can fill up that cart for $25. We want all of you to help us empty out this place, so we can close today.”

I hurried back to the aisle where I had passed on the expensive coffees and grabbed four varieties. I headed to the Isle where the protein packs of nuts had almost made it to my cart. I grabbed some dark chocolate. Then I headed for the jerky and the juice. I took every pouch of tuna they had and every can of southwest corn (I make this corn dip about 10 times a year, and it requires 4 cans at a time).

I commented to a young woman who was waiting in front of me to get through the aisle that I was impressed at how civilized everyone was being.

The frozen food aisle brought fruit, smart ones dinners, and ice cream. I paid $29.28 and headed into the parking lot with a heaping cart. A man outside offered to help me unload it so he could use my cart. His name was John, and I ended up giving him some of the coffee.

I had filled up my whole back seat, and wasn’t sure what I would do with all the groceries. I called my friend, Autumn, to see if she wanted some of it. I still had to fill a trunk with canned goods. I had several things to do today, but this ended up being a big production that took up three hours.

Now I feel like I have to hurry and eat it all up to get rid of it. Despite all the groceries I bought, there wasn’t really anything to eat for dinner – except for frozen dinners and ice cream.