I just started running with the Hash House Harriers – A Drinking Club with a Running Problem. I “hashed” a little when I lived in Moscow, and it kind of reminded me of Toastmasters for people who like to get together, get active outdoors, and do some drinking. 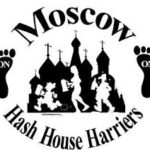 Someone called the “hare” lays a trail in advance of the group’s arrival. There is a “chalk talk” where the hare explains the markings he or she left along the trail. There are always some situations where there are dead ends and unusual routes through various obstacles and “checks.” They also have beer stops and shots along the route where everyone waits for all the walkers to catch up before proceeding. Those who run ahead indicate what they are finding in the markings by hollering and whistling. It is usually just through normal city streets, so we make our marks with flour and toilet paper. Like a lot of old-school clubs, there is a lot of tradition and ritual. You wear long socks, H3 shirts, and often hats. Everyone also has a homemade necklace made out of beaded tiles that contain your “Hash Name.” You have to hash for awhile before you get a name. I had been called “Sampler” when I hashed in Russia, so I made my own beaded necklace with S-A-M-P-L-E-R dangling from it and the obligatory whistle.

Every hash ends with a “circle” where various people are called out and reviled with various insulting, dirty, or party-themed songs. They have tens of songs where they’ve altered the lyrics to be dirty or about drinking and hashing. The hare is always the first person brought into the circle. We all tell them how much the trail they laid sucked, singing a song to that effect.

You get called out for finishing in front or in back, for having a special occasion or not hashing for a while or not wearing hash gear. Then there are accusations where hashers point out (Hashers point with their elbows) things others have done that cause them to deserve being singled out.

I really like the long, strenuous walks in diverse areas outside. I also like drinking beer and hanging out with lots of people. It is good to be a part of something.